It is my belief that if you can write, you can do anything. Especially in this town.

Writing for me comes easily when I know what I’m talking about. When I write about myself, whether it’s through this blog or a fictional novel that is based on my life*, cake. But when I attempt to write about something that I think will sell (based on what I’ve already seen on TV and movies), in a format I’m not all too familiar with (screenplay) duh, just so I think it can forward my stagnated acting career, I fall short. By a lot. To the point that I avoid any progress on the manuscript. Le sigh.

I know that when the going gets tough, you just have to plow right through it, to not give up! I just have to keep on writing! But I can’t. (Not with that attitude). It’s daunting to write about something for an audience I’m not all too familiar with.

The set up. So I know someone that has a production company in Viet Nam. (Yo, if I can’t make it here, I can maybe make it out of here). She says that the movie industry in Viet Nam is booming. Exponentially.  But there is a lack of scripts.

The catch. The story must appeal to a Vietnamese audience. I am not Vietnamese. I’m American. My friend said that Vietnamese humor is completely different than American humor. Vietnamese people love slap stick, obvious physical humor. I’m an American that find slap stick humor out of date and am more accustomed to sarcasm, irony, dry wit — which would never appeal to the Vietnamese public. Another le sigh.

I didn’t let this minor discrepancy hold me back. Oh no, I started writing this script … last year, about a month after my friend told me about this opportunity. Too bad I’m still not done with it and it has been over a year. Pathetic Thi!

Instead I concentrate on what I do know. Myself. Oh the so self-involved American. Get. the. fuck. over. yourself. But at least I know what George Martin feels like. I’ve procrastinated, just like he has in his Game of Thrones books. (Maybe he doesn’t know who’s going to win the throne, thus he procrastinates). I wrote more blog posts on my day to day life, I’ve edited my old fictional novels based on my life, I’ve avoided that script that I know nothing about.

And here is where I must ask myself, is that so wrong? Is it so wrong to stop writing about something I don’t know and concentrate on something I do? I’ve gone to panels that spotlight writers in the industry and I’ve noticed that overwhelmingly they are mostly comprised of da da da DA … white 30-40 year old males. Unsurprisingly. This would explain the prolific and wide range of white male roles on television. These guys aren’t racist, they’re just writing what they know, themselves. Different versions of themselves and their friends. If they were to write something other than themselves, it would come off as a caricature, a stereotype, a sloppy cover up of something they know nothing about.

I am not getting any younger, true. Ugh, the countdown to my 30 year old demise is looming near. Hollywood isn’t changing quickly for me to be the next star any time soon (I just got an audition as waitress, yaayy). So what must I do? I must write. I must get better. I must be part of the change I want to see.

The solution. Just keep writing. Maybe I’ll find a balance between the script for Viet Nam and find a little of myself in Vietnamese’s sense of humor.

*Some of you have asked me where you can find my fictional novels. Here they are: 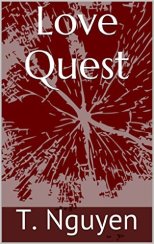