So I’ve been volunteering.  I’ve been doing Bookpals.  It’s a volunteer program through SAG/AFTRA foundation.  Actors are assigned to schools in the LAUSD and get to read to kids in the classroom.  I’ve been reading to a kindergarten and first grade class.  I love love my kids.  They call me miss Thi and as soon as they hear my knock on the door, they smile and look at me like I’m a hero.  The kindergarten class gives me a big hugfest after every session.  It’s awesome, it’s rewarding and it’s soooo fun! I love doing it! It’s like the perks of being a teacher without having to discipline or lesson plan.

Anyways, through doing this, I was invited to see a symposium about promoting children’s literacy.  We were presented with the problem first: 32 million US adults cannot read. 14 percent of adult Americans demonstrated a “below basic” literacy level and 29 percent exhibited a “basic” reading level.  Every 26 seconds, a child drops out of school in the US.

Then the panel, that was comprised of legislators and education board members, talked about possible solutions: starting at first breath and implementing literacy to kids in preschool, retraining teachers, and teaching parents to read to their kids.

Finally, the whole thing was opened to questions from the audience.

I had a burning question.  But I get mad stage fright.  So while the panel was going, I was having an internal conflict of whether I should go up and ask my question or not.  Finally, when the symposium was about to end, I stood up and asked my question. One of the panelist, David Crippins had said that there wasn’t a culture of success that is determined on being smart.  We have a culture of stuff, where it is implied that to be successful, you must own the best purse, the best phone, shoes or car.   This sparked my question. I stood up and said, “We live in LA.  We can create that culture of success through the media.  One of the best campaigns that was really effective was the no smoking campaign.  Can’t we do a campaign like that but for promoting children’s literacy and showing how staying in school is cool?”  Because I had stalled for so long, the panel didn’t really have time to discuss my question.  David agreed with me and then time was up.  The panel ended.

I was relieved that it was over and as I headed toward the exit, I was approached by a good-looking guy.  He gave me his business card and said that he liked what I had to say and wanted to further the conversation. The symposium was at UCLA and since we met there, I thought that perhaps he had gone there and maybe we would have common friends.  So I typed in his name on Facebook and to my surprise I found that he had a FB fan page with over 22000 likes.  Jeez louise.  His name is Colin Egglesfield.  He’s been in tons of things, the Client List, Melrose Place, All My Children.  This guy is super accomplished and knows how to get things moving, make things happen.  And he wanted to make a psa about all this happen.  Incredible!  We had lunch together a week later where I met his producer, Stephen.  Stephen connected us to a director, mike, and a month later, we shot the psa!

The psa is about listening to the kids.  Seeing if their school is supporting them in their dreams, is nurturing their unique gifts to share to the world, and is preparing them for life. Asking them what they need from their schools.  Asking them what they would do to make it better.  It’s a psa to bring awareness of the problem and spotlight all the different organizations and people that are trying to resolve this issue.

Colin didn’t have to include me in this psa.  He could’ve taken the idea and run with it.  But instead, he approached me and included me in all aspects of it.  From researching the stats to writing part of the script to even being on camera with him.  It was such a collaborative effort and I am so grateful that I got to be a part of it.  I kept saying to him, “you made it happen”, and he said to me, “no, we made it happen.”  Yes we did, but he made it possible. 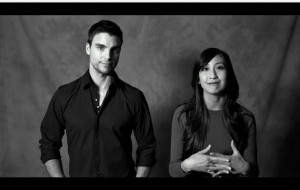